The international trade fair event for automotive tuning, lifestyle, and the club scene put the pedal to the metal for four days at Lake Constance 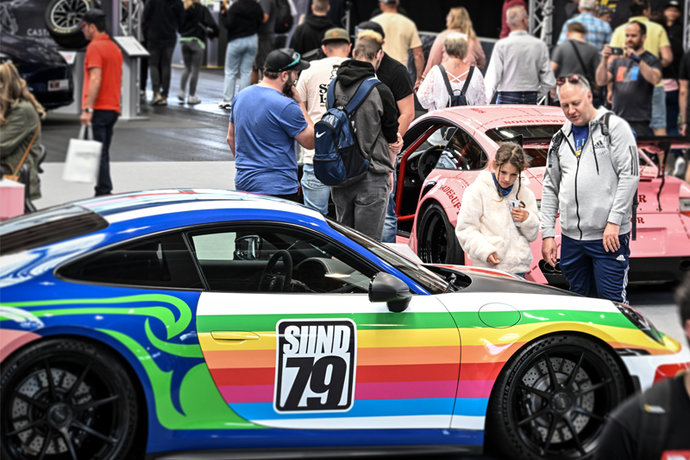 In the third year of the pandemic, Tuning World Bodensee finally came roaring back. From Thursday, May 26, to Sunday, May 29, the exhibition halls in Friedrichshafen were overrun with some 87,300 car enthusiasts (compared to 82,300 over the course of a three-day fair in 2019), with visitors admiring sports cars tuned with carbon fiber, low-rider daily drivers, and gilded show & shine vehicles. “Tuning World Bodensee has once again demonstrated that love for automobiles and automotive tuning attracts a wide-ranging and young audience from all over Germany and the local tri-border area. We are delighted with a successful relaunch of the event as well as the satisfaction of the exhibitors and a full exhibition center,” says Managing Director of Messe Friedrichshafen Klaus Wellmann, summing up the fair. In addition to the “Wheels vs. Gravity” stunt show and the drift shows, the battles of the European Tuning Showdown in Hall B5 were also a major attraction.

With a total of 1,500 cars, 850 participants from the industry and enthusiast scene, 11 halls, and three outdoor areas, the fair event celebrated custom works of art on wheels for a total of four days. “We had to patiently wait for our chance and demonstrate flexibility at short notice during the very brief planning phase, but it all paid off in the end. The members of the tuning scene celebrated their reunion, caught up with each other, talked shop, and enjoyed the unique atmosphere of this automotive exhibition. The visitor numbers also show that our hard work was able to get good results: in the highly volatile era of the coronavirus pandemic, the members of the industry and enthusiast scene, as well as those of us in the organizer role, are staunch believers in Tuning World Bodensee,” Project Manager Dirk Kreidenweiss explains. For the exhibitors, the first trade show event for car tuning, lifestyle, and the club scene in two years was a triumphant success: “We are quite satisfied with Tuning World Bodensee 2022. After the event went on hiatus due to the coronavirus pandemic, we saw this year’s Tuning World Bodensee as something we simply had to attend: We want to give our support to the exhibition, and we are also able to reach our fans in Southern Germany, Austria, and Switzerland here. The audience was friendly and eager to make purchases, and we met our targets for the entire Tuning World Bodensee by Saturday. We will certainly return next year and expand our commitment even further then,” say Foxed Store owners Mareike Fox and Dirk Klötzing, giving the bottom line. Sales Manager for Germany and Austria for BBS automotive Elvis Sklepic had similar things to say: “It feels great that trade fairs have finally returned, and we at BBS are delighted to be back on-site with our own booth in Friedrichshafen after a break lasting more than nine years. The visitors are demonstrating avid interest in our new flexible BBS wheel system. Our target group is placing orders directly at the booth. We are delighted to see our BBS wheels so strongly represented on so many show cars and club vehicles here at Lake Constance. The fact that Austria and Switzerland are just a stone’s throw away also makes Tuning World Bodensee the place to be.” Dominik Koller, owner and Managing Director of Bavarian Car Club GmbH, adds: “The four days we spent at Tuning World Bodensee went way beyond our expectations. The visitors were very interested in our products and eager to make purchases. We had already doubled our target expectations by the third day. We spoke to a wide variety of target groups who are enthusiastic about tuning in the area of show & shine. We’ll be back with a bigger booth next year.”

In addition to the live and in-person experience at the exhibition site, Tuning World Bodensee could also be followed on social media. A total of some 7000 social media posts were published by the community in the run-up to and during the event. Between the social media participation of the public and the posts on the official channels of the exhibition, more than 7.4 million people were able to participate in the event.

Grandstands overflowing with fans were the order of the day in the outdoor areas, where inverted motorcycle riders, beach buggies doing backflips, and tires giving off smoke in the drift area provided a shot of adrenaline to the audience.  “The show and event program is a key component of Tuning World Bodensee that draws visitors in droves,” reports Project Manager Dirk Kreidenweiss. In the E-Sports Arena in Hall A7, the spectacular skills of world-class sim racers provided a completely different kind of thrill. With a party truck, DJ, and an audience looking to dance, the well-attended Sunset Sessions at the Open Air Grounds West promised a good time for all at the end of the day.

At the European Tuning Showdown in Hall B5, heartbeat fights were the order of the day. In this event, the crème de la crème of European show cars competed in a battle royale that pitted sparkling engine compartments, carbon-fiber conversions, and perfect wheel & tire tuning against each other. The Style Mile was even bigger in 2022, with some 300 vehicles participating. Halls B3 and B4, as well as the East Foyer, were teeming with cars representing the latest from the tuning world. This ranged from rarely seen cars such as a fire-red VW Puma from Brazil and a perfect mint-green VW Beetle to a pristine lineup of high-class limousines.

Transformation, perfection, and optimization were also on the agenda in the Private Car Area, the club halls, and the Polo Dome, where the community celebrated the full range of their favorite VW model and a long-awaited reunion after a hiatus lasting two years. True to the slogan of “It’s not a trick, it’s a Polo,” tuning fans were captivated by the Rotten Rats, a rally polo, and a crew cab pick-up. Opportunity for celebration was also available in Halls A3 to A5. These spaces were home to the Club Area, which enabled friends of the enthusiast scene to meet up at Tuning World Bodensee. It was an equally convivial atmosphere in the Private Car Area, in which every seventh project was built by a female tuner. Publishing house MAV-Verlag organized the Private Car Area.

“We need to keep in mind that it has only been seven weeks since it became possible to hold fairs again. Despite the challenging planning conditions this year, we again managed to put together a great event and offer the members of the industry and enthusiast scene a place to meet. In this respect we see the number of visitors as well as the feedback from the community as affirmations of the true value of our event. The exhibition center played host to many loyal fans as well as enthusiasts new to the event. The industry has given us a great deal of positive feedback that we are now integrating into the planning of the next event. We are optimistic that we will be able to implement an even more extensive trade show event next year, when conditions will be even closer to normal,” Messe Friedrichshafen Managing Director Klaus Wellmann explains.

The next Tuning World Bodensee will take place on the exhibition grounds in Friedrichshafen from Thursday, May 18, to Sunday, May 21, 2023.